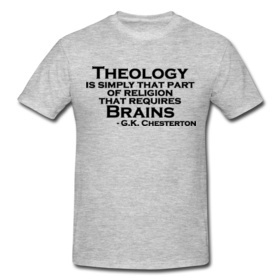 I count myself a fan of Donald Miller. I am particularly evangelical about Blue Like Jazz. I think the church needs his voice: a Christian able to laugh at Christianity, who is non-ideological, and yet deeply committed to Jesus. But he lost me in a column which concluded:

“Let me ask you this: Aren’t you a little tired of scholars and pseudo-scholars fighting about doctrine?

Is it worth it that you are divided against other denominations because scholars picked up their ball and stomped off the playground? If you are tired, then be the church. I’m not kidding; you don’t know everything, but you know enough. Be the church and be united. Let the academics go to an island and fight about the things that matter to them, and we will be united based on the things that matter to us.”

His basic premise: the church is led by scholars, and would be better off led by plumbers.

In some ways, this is patently false. Most church leadership, as I have experienced it, is held by people who have shown themselves to be effective leaders. Often times, these folks are not the most scholarly, but (hopefully) the most effective.

This is also indicative of something I thought Miller would have rejected from his fundamentalist background: anti-intellectualism. Granted, his is a more friendly, postmodern form, but at least here he seems to have an anti-scholarly bent with which fundamentalists of the early 20th century would be sympathetic.

In another sense, he is correct: “professional” church people and new Christians, clergy and laity, both have roles to play in church leadership. In fact, one of the most important, and oft neglected roles of the scholar-pastor is to “equip the saints for the work of ministry.”  (Eph. 4:12) These saints would include plumbers and lawyers and housewives and grandfathers.

Donald Miller may not care much for fights about doctrine, but there will be doctrine regardless of whether or not it is discussed or named as such. This is one of the fundamental lies of the “non-denominational” church movement: there’s no such thing as untraditioned (Miller might prefer un-storied) Christianity. It never has been “just the Bible and God’s people” and never will be. The fact that most Christians don’t know the megachurch they are attending is functionally baptist (most practice believer’s baptism and local church autonomy), and these churches can get away with the claim, is evidence not of too much scholarship but of too little.

So study theology. There is a good case to be made that even atheists should study theology; how much more should God’s people! Dig into the doctrine. Don’t accept just whatever your pastor or parents or “Christian” bookstore claim. Dig deep. Think. Pray. Wrestle.

Every Christian is a theologian; the question is, are we good theologians?

My own UMC denomination was not formed by an “academic” over doctrine, but over practice. Wesley began an evangelical order within the Anglican Church to reach those that were not being reached, through methods that were being successful in other parts of the Body of Christ. Was he doctrinal? You bet. But this fed his missional drive to all the people that the Anglicans seemed content to leave in the dust. This story brought to you by…scholars. 🙂

The Miller article is not as new as I initially thought. My bad! But better late than never.