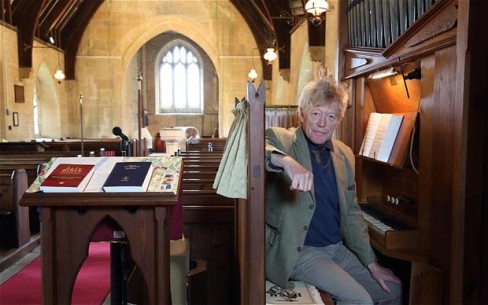 Scruton at the Organ, Courtesy The Telegraph/John Lawrence

Baptism of the Lord Sunday is upon us. In many United Methodist congregations, this day is marked by a somewhat unique service: a reaffirmation of the baptismal covenant. (For any interested parties, this year I am using this new service from the General Board of Discipleship instead of the service in our hymnal.) The basics: insofar as United Methodists are sacramental Christians (an identifier that varies much from place-to-place, despite official teaching and worship materials), we baptize both infants and adults, by any mode possible (it is God, not the amount of water, that provides the grace) but do not rebaptize. From time to time we do “reaffirm” our baptism; sometimes this is through a highly ordered communal ritual, and others – as in several services at my seminary’s chapel – a simple bowl of water is present as one enters the worship space and one is invited to touch the water and “remember your baptism.”  I do this service myself annually on Baptism of the Lord Sunday; it is, after all, one of those rare occasions when the church calendar lines up nicely with the world’s calendar (and who doesn’t love a fresh start at the beginning of a new year?).

Of course, baptism is an oft-misunderstood sacrament among the people called Methodists, especially here in the Bible Belt where many of our neighboring churches will happily rebaptize anyone willy-nilly and insistent low-church Protestants will inform their sacramental acquaintances that infant baptism “doesn’t count.” Misunderstanding is also rampant for the Reaffirmation of the Baptismal Covenant services. I’ve had both family and church members tell me about being “rebaptized” on this particular Sunday, despite what I thought were clear teachings in the ritual itself and from my mouth in describing the service. This year I’ve actually included a FAQ on the cover of our bulletin that covers these questions so that this ghastly heretical accusation can be avoided.

All this reminds me of some rather cutting remarks by the British philosopher Roger Scruton. Never one to mince words, he has a biting description of Protestantism in his interesting little work An Intelligent Person’s Guide to Philosophy:

“Just as there can be religious observance without religious belief, so can there be belief without observance, or belief which leaves observance to the conscience of the believer. The Protestant tradition of Christianity has tended in this direction, gradually shedding what it regards as the idolatrous trappings of the Roman Catholic ritual, until little remains of the outward display of religion, and all is reduced to a stark confrontation between God and the soul. Such an attitude is fraught with dangers. The via negativa which leads to God by discarding the images that disguise him, may come close to discarding God as well…In its war against the impure and inessential, the Protestant religion is always in danger of negating itself: which is one reason why the Protestant churches [Mainline?] are now in far greater crisis than the Church of Rome. Nevertheless, in its stable and historically durable forms, the Protestant religion has shown an interesting tendency to combine clear theological beliefs with utter vagueness in ritual and worship.” (Roger Scruton, An Intelligent Person’s Guide to Philosophy [New York: Penguin 1996], 87.)

Scruton, who himself plays the organ in his diminutive local Anglican parish, is on to something. Protestantism has so elevated the verbal proclamation of the word (aka preachin‘) that what passes for good church in many places is inspirational preaching coupled with a slammin’ band (and do please pass the crullers and coffee). Don’t get me wrong, I don’t mind informal, thumping churches and I like the coffee shop atmosphere, but at some point Scruton’s “self-negating” critique has to hit home. One can (as often happens) so purge the Christian faith of all symbol, ritual, and characteristic language that what is left is a husk of the Apostolic community, an antiseptic kind of worship, or, if you will, a Body of Christ which has been stripped of its scars. It is easy to sell people on an un-churchy church, but it remains to be seen if one can form Biblically and theologically articulate, holy, full-orbed Christians this way.

Ultimately, teaching and worship, theology and ritual go together.  Where the fullness of the faith is on offer, one will need ritual, symbol, and poetry to describe the ineffable ways of God to God’s people. Where the faith is reduced to a few fundamentals, or a silver-tongued affirmation of an undemanding deity who wants you to have “your best life now,” vagueness in worship and rite will be not only a temptation but a necessity. Whether it is on Baptism of the Lord or on “any given Sunday,” God save us from being so Protestant that we cease being Christian.