Human beings are thinking creatures.  To be sure, we are embodied, and our flesh-and-blood living matters, too.  But while our capacity to think is a quality that separates us from the beasts, this too often goes unused.  This is tragic for all people, but especially those who claim to be followers of Jesus.  Christian faith is not about the abandonment of critical thought but about its enlivening, about its highest end.  N.T. Wright argues that the Church – the body of people, alongside Israel, called to be and to bear God’s message to the world – cannot be herself without thinking:

“If the ekklesia of God in Jesus the Messiah, in its unity and holiness, is to constitute as it were its own worldview, to be its own central symbol, it needs to think: to be ‘transformed by the renewal of of the mind’, to think as age-to-come people rather than present-age people, to understand who this God is, who this Messiah jesus is, who this strange powerful spirit is, and what it means to be, and to live as, the renewed people of God, the renewed humanity.  This is a worldview, in other words, which will only function if it is held by humans with transformed minds, and who use those transformed minds constantly to wrestle with the biggest questions of all, those of God and the world.” (Wright, Paul and the Faithfulness of God, 567)

If you spend too much time in the wrong internet haunts, you quickly get the impression that Christians today have no capacity for or interest in critical thinking.  Oh, to be sure, there are a lot of rhetorical grenades tossed about, many blogs and articles written, read, and shared, but most of this takes place within very defined and uninteresting echo chambers.  The conservatives quote Witherington, Piper, or Al Mohler, and the progressives quote Borg, McLaren, or Rachel Held Evans and likely post 15 articles from HuffPo Religion, AKA theology’s Mos Eisley.  It’s all quite dull, really.

Christianity cannot be sustained absent renewed minds that come about by prayer through the gift of the Spirit.  This is a non-negotiable part of our faith, though many seem to want to make it option  (just look at my previous post’s comment section). 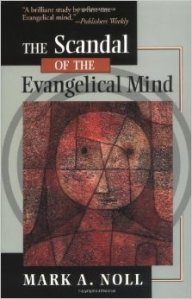 I suggest the church needs thought police.  Not, mind you, to police what is thought – but simply that thought occurs at all.  While I don’t count myself a progressive or conservative Christian, I can appreciate such Christians when they engage their own and others’ faith traditions with depth and sincerity.  Unfortunately, too much of our conversation in the church turns on surface-level ranting that makes MSNBC and Fox News look academic.  Two decades ago, Mark Noll charged that The Scandal of the Evangelical Mind was that there wasn’t much of one.  Unfortunately, rather than rising above that, many progressive evangelicals and other populist Christian voices have continued this trend.

As Wright notes, there is no church without renewed minds marked by Spirit-imbued intellectual effort.  There is much more, of course, to being God’s people.  But when lived out truly, our vocation to the church will always include, treasure, and encourage the life of the mind.