Much of modernity (think the post-1700’s world) can be explained as a steady, systematic rejection of tradition. Whether this is in the realm of politics, science, religion, or social norms, the last several hundred years have seen the Western world (and those places influenced by the West like Turkey, for instance) steadily retreat from the moors that had held it in bygone eras. Whether this is a positive or negative development is a separate debate; what interests me is the way in which the rejection of tradition has itself become a tradition in the oh-so-un-self-conscious modern world.   Jaroslav Pelikan, the great historian of Christian doctrine at Yale (until his death in 2006), wrote the following reflections about the debate between “Bible” and “tradition” that came to a head during the Reformation:

“But tradition there certainly was, even before and within the Bible and not simply after the Bible: tradition was…the ‘source and environment of Scripture.’ [However,] drawing a sharp distinction between gospel and tradition had been a major plank in the platform of the Protestant Reformers.”

As NT Wright has described elsewhere, the newly invented Reformation divide between Scripture and Tradition is in many ways a false dichotomy.  What were the gospel authors writing out of, if not established (even if early) traditions about Jesus?   Paul uses the language of tradition when he reminds Timothy to keep “what I passed on to you.” (1 Cor. 15:3)  Pelikan argues that studying the historiography of the Reformation leads one to

“…the uncovering of the processes by which the very anti-traditionalism of the Reformation has itself become a tradition.  After four centuries of saying, in the the well known formula of the English divine, William Chillingworth, that ‘the Bible only is the religion of Protestants,’ Protestants have, in this principle, nothing less than a full-blown tradition.” (The Vindication of Tradition, [New Haven: Yale University Press 1984], 9, 11.)

There really is no escaping tradition.  Jeff Stout of Princeton made a similar point in Democracy & Tradition: those who would reject Western-style democracy as antithetical to tradition (particularly, here, Christian tradition) should take note that democracy is itself a tradition and a simplistic rejection for rejection’s sake is ultimately unhelpful.  So too, is the knee-jerk and often over-blown reaction against any kind of tradition.

My own part of the Christian family just argued about the possibility of online communion. As with so many other fronts in the so-called ‘Worship Wars,’ many took sides based solely on a rejection or embracing of tradition itself.  Thus, every attempt to get “beyond” tradition only forms a new one in its place. This is why an increasing number of young adults find ‘contemporary’ worship a vapid experience designed by and for their parents’ generation, and are turning instead to expressions of faith that are more tied to practices and prayers which possess deeper roots.

What does it mean for Christian worship to descend into mere secularism? According to Fr. Alexander Schmemann, the secularist mindset has an inability to appreciate symbol.  This failure leads to the use of symbols as only teaching tools, a utilitarian move that ultimately leads to the destruction of Christian symbols themselves and Christian worship as a whole.  This is particularly true when one looks at the misuse, abuse, or poor celebration of the sacrament par excellence, the Eucharist:

But the whole point here is that the secularist is constitutionally unable to see in symbols anything but ‘audio-visual aids’ for communicating ideas.  Last winter a group of students and teachers of a well-known seminary spent a semester “working” on a “liturgy” centered the following “themes”: the S.S.T., ecology, and the flood in Pakistan.  No doubt they “meant well.” It is their presuppositions which are wrong: that the traditional worship can have no “relevance” to these themes and has nothing to reveal about them, and that unless a “theme” is somehow clearly spelled out in the liturgy, or made into its “focus,” it is obviously outside the spiritual reach of liturgical experience. The secularist is very fond today of terms such as “symbolism,” “sacrament,” “transformation,” “celebration,” and of the entire panoply of cultic terminology. What he does not realize, however, is that the use he makes of them reveals, in fact, the death of symbols and the decomposition of the sacrament.  And he does not realize this because in his rejection of the world’s and man’s sacramentality he is reduced to viewing symbols as indeed mere illustrations of ideas and concepts, which they emphatically are not.

It seems to me that the  elephant in the room here is the extreme anti-Catholic wing of Reformation, represented by folks like Zwingli for whom that which church throughout time and space has called sacraments are reduced, instead, to mere “symbols.”  As a professor of mine once said, “If they are just symbols, then the hell with them!”  Point being, there is no reason to make the entrance to the church (baptism) and the meal that constitutes the church and continually feeds us of God’s grace (Eucharist) such central acts of Christian worship if they are only “symbolic.” For there are other symbols.  There are simpler symbols, more relevant, more accessible, more modern and easier to market.  Schmemann concludes this section with the following:

To anyone who has had, be it only once, the true experience of worship, all this is revealed immediately as the ersatz that it is.  He knows that the secularist’s worship of relevance is simply incompatible with the true relevance of worship.  And it is here, in this miserable liturgical failure, whose appalling results we are only beginning to see, that secularism reveals its ultimate religious emptiness and, I will not hesitate to say, its utterly un-Christian essence. (For the Life of the World, 125-126, emphasis added.)

Note: This post was edited to reflect a corrected understanding of Zwingli within the history of the Reformation.  I had incorrectly associated him with the Radical Reformation, while he was clearly in the reformed camp.  I only meant to associate him with the anti-sacramental edge – he did go further away from Rome on the Eucharist than did Luther, Calvin, and the Anglicans  – but I had listed him in the wrong tribe.  Thanks to Shaun Brown for the correction. 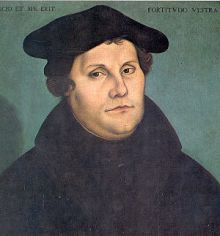 To be sure, The Protestant Reformation was a “decisive moment,” but is it really one worth singing about?  If yes, then my inclination is to sing a song of lament rather than celebration.  As a pastor serving my first congregation, I was drawn to All Saints’ Day remembrance but never considered a whole Sunday dedicated to the Reformation.  Perhaps this is easy because I am not Lutheran.  But it seems strange to celebrate the fact that Christ’s body is broken and battered.  Yes, there was a day when Catholics were suspect as “un-American,” and they in turn were not supposed to darken the door of a Protestant Church (as my RC friends tell me).  But times have changed.  As Peter Gomes of Harvard points out:

That, thank God, is mostly ancient history. Now Roman Catholics routinely sing “Amazing Grace” and “A Mighty Fortress Is Our God,” and for many Protestants the pope is one of the few bastions of orthodoxy left standing. Catholic bashing is not the “done thing” on Reformation Sunday, and a Protestant identity that continues to define itself by what it is not is in an increasing state of crisis.

Of course, this leads to a dilemma that Gomes names: What to do on Reformation Sunday?

I am in a church where Reformation Sunday is an option not normally taken.  But for the wider Church, I must ask: why celebrate this day? Why not an Ecumenical Day (instead of, not in addition to)?  Surely World Communion Sunday sends a better message.  As a corollary, I wonder of the Orthodox celebrate their break with Rome on a particular Sunday?

The gospel lection for this past Reformation Sunday was from John 8:31-36:

31Then Jesus said to the Jews who had believed in him, “If you continue in my word, you are truly my disciples; 32and you will know the truth, and the truth will make you free.” 33They answered him, “We are descendants of Abraham and have never been slaves to anyone. What do you mean by saying, ‘You will be made free’?” 34Jesus answered them, “Very truly, I tell you, everyone who commits sin is a slave to sin. 35The slave does not have a permanent place in the household; the son has a place there forever. 36So if the Son makes you free, you will be free indeed.

Of course it is ironic that we read from John to preach on Reformation Day; it is John’s Gospel, afterall, that records Jesus’ prayer for the disciples, “that they may be one.”  But this isn’t the stuff of sentimentality.  Christian unity is not a pie-in-the-sky dream, a wish based on the desire to finally “just get along.”  Rather, it is a hope (and a promise!) of Jesus himself, and an imperative for Christian mission.  What does it mean that people around the world have to choose between various factions (read: churches) and decide which one has the “right” Christianity?  It is more likely they will simply not choose for Christ at all.  The Word of God does not respond to market forces well; I’m not so sure that we are sharpened by the critiques of competing theologies and liturgies.

The results of the Reformation are obvious today: we have perverted this notion of conscience and freedom so that a myriad of “churches” exist, with a wide variance in faith, proclamation, and practice.  This is not the truth of Christ that sets us free.  Truth is unitive; God is truth and God is one.  There can be unity in that diversity (as with the Holy Trinity), of course, but Christianity is not diverse. The Church, tragically, is broken and divided.

I do not doubt that the Reformation was necessary; I only question our need to celebrate it.