One of my favorite films of all time is actually a spoof of one of my other favorites.  As you may have guessed from the title, it is Mel Brooks’ Spaceballs, a classic slapstick comedy that pokes fun at the Star Wars saga (later George Lucas would release three “Prequels” that were even more hysterical parodies of his original work).  At one point in the film, the villain Dark Helmet (Rick Moranis), sets out to pursue the hero Lone Star (Bill Pullman).  His second-in-command orders light speed, but Dark Helmet informs him that “light speed is too slow” and orders him to take it to the next level: ludicrous speed.  (Watch the scene here if you wish – minor language warning, though.)

Today a mysterious cabal of conservative pastors and theologians announced in a press release through Good News that schism is already a reality, and we should  be Christian enough to go our separate ways in charity.  In other words, they have just gone from light speed to ludicrous speed.

I was particularly disappointed in their dismissal of a “middle way,” for which my colleagues and others have been advocating.  I cannot resist the temptation to use their own wording against them and suggest:

Talk of an “amicable” separation is comforting and sounds Christ-like.  However, such language only denies the reality that we need to admit.  Neither extreme represents either the main thrust or the majority view of the UMC, most of whose members and clergy live somewhere in between.

But today, mostly I am just sad that it has come to this.  The will of God is not divorce, however polite and “win-win,” but reconciliation.  Old Testament scholar Walter Brueggemann reflects,

“It grieves the heart of God that the children are estranged from God and from one another. God wills an utterly reconciled community and is at work toward that reality…the task of reconciliation includes the ordering of the family of faith itself. It is ludicrous for the beloved sons and daughters of God to be alienated in their own life. Surely at the center of God’s vision of reconciliation is an image of a united church. That will not come by trade-offs or power plays but by a new radical obedience in which our hoped-for unity calls us to abandon much of our divisive history, even that part of it that we treasure.” (104)

I am on retreat this week at a Benedictine monastery, planning sermons for the upcoming year.  Part of my time has involved worshiping with the community throughout the day.  A couple of nights ago at vespers, we sang Psalm 133:1, “How good and pleasant it is when brothers dwell together in unity!”

It was deeply moving, not only to sing that as a United Methodist in a  time of chaos, but to do so among a group of brethren who have taken the Bible seriously enough to pursue the hard work of what Brueggemann calls “radical obedience” towards that vision. God’s ultimate will for his church is not brokenness, however harmless and cordial, but unity.  The extremes – both left and right, mind you – seem intent on running in the opposite direction.  But we will not accomplish God’s will through “trade-offs or power plays.”  You 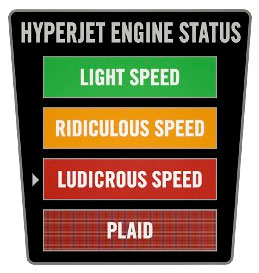 can end a hostage standoff by shooting the hostage, but that defeats the purpose.  Likewise, two (or more?) churches that would result from the desired schism may purchase a measure of relief, but it will  come at great cost.

Ludicrous speed it is.  If the extremists in both camps – and yes, I think both are equally responsible – don’t take their hands off the accelerator soon, there is only one place left to go: to plaid.

And while I don’t know what that means, I don’t want to find out.